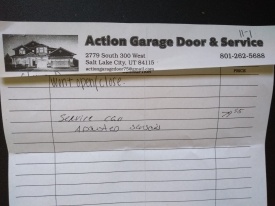 My garage door had been very uncooperative.  It would get stuck.  It refused to obey the car remote. It made noises.

I did my YouTube and WikiHow research and tried all of the suggested fixes.  Finally  I surrendered and called the repair guy.  I chose this one because I had a coupon for a free service call.

Garage door guy arrives at 11:06 am.  At 11:07am he’s done and hands me the bill for $79.95.  Apparently, there were a few cobwebs over one of the sensors which threw off its delicate sensing abilities.

I handed the guy my coupon and he said, “Oh that only applies if we have to replace parts.”

I wonder if it’s cheaper to get a bug guy to get rid of the spiders?